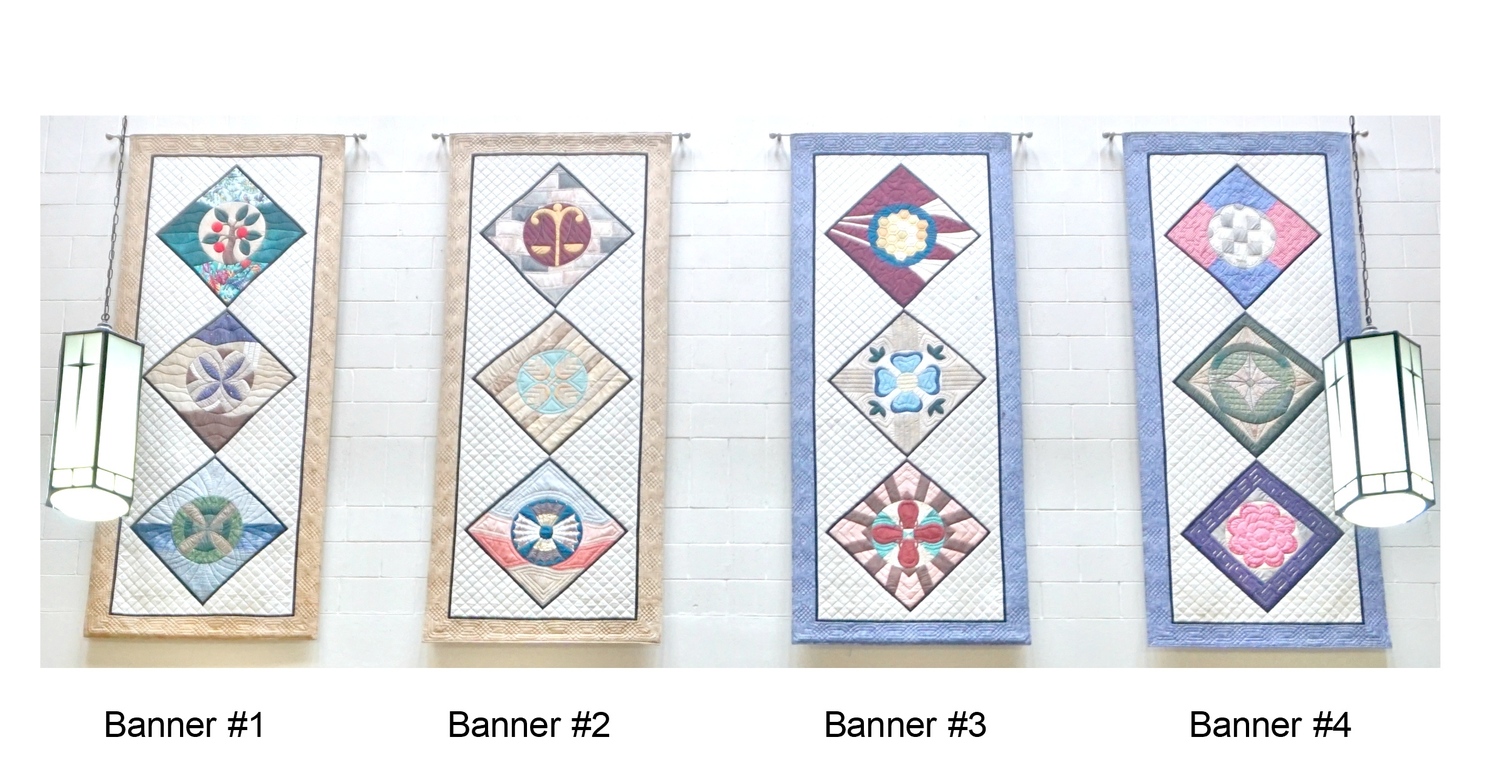 Eve: It is appropriate that Eve’s name means “life,” because she was the first woman, the mother of all. She bore three sons, Cain, Able, and Seth. Whatever her accomplishments, we remember her most for the transgression she made. The command not to eat fruit from the tree in the middle of the garden was given to Adam, but it was Eve who first succumbed to the persuasion of the serpent and ate the fruit. We do not know kind of fruit it was, but the apple has come to symbolize the forbidden fruit. An apple tree set in a lush garden has been created for Eve.

Sarah: Born Sarai, Sarah and Abraham both laughed when three visitors, messengers from God, told them that they would have a son within a year. Abraham was over one hundred years old and Sarah was ninety, however, true to God’s promise, Isaac was born to them. He was the father of twelve rulers and had descendants as numerous as the stars in the heavens, also part of God’s promise. Abraham and Sarah were nomads, and she is remembered with tents in the desert. The three bars represent the messengers, and a starry sky is the background.

Miriam: Miriam kept watch over her baby brother Moses, hidden in a basket among the reeds along the shore of the Nile River. When the baby was discovered by Pharaoh’s daughter, Miriam quickly offered to find a woman to care for him, thus saving his life. Miriam lager became a leader with her brothers Moses and Aaron as the Israelites wandered through the desert in search of the Promised Land. Her block includes a basket among rushes, with the river in the background.

Deborah: Deborah would be a woman of outstanding ability today, but in Biblical times, her accomplishments were extraordinary. She was a judge, counsellor, military commander, prophet, and political leader. As the time, Israel was emerging from a group of squabbling nomadic tribes into a nation, and had no king. The judges acted as leaders and arbitrators. It was a man’s world. Deborah is remembered with the scales of justice. The background is a stone wall, reflecting the part she played in building a system of justice for the young nation.

Ruth: Ruth, a Moabite, was a rebel of sorts. The custom of the day was for a widowed woman to return to her own family, but she refused to do this, choosing instead to stay with Naomi, her mother-in-law, who was also widowed and was returning to her home in Bethlehem. It was Ruth who gathered food for them both, gleaning in the fields belonging to Boaz. Her hard work and unselfish acts caught the eye of Boaz, and she later married him. She bore a son, Obed, who became the father of Jess, who was the father of David. Four heads of wheat are set against a background of grain fields in the pattern for Ruth.

Esther: During the time of the exile of the Jews, Esther, a young Jewish girl, became the second queen of Xerxes, king of Persia. His first queen had been banished for disobeying his command to appear and dance at a feast. When Esther saw her own people in danger, she went to the king to intercede, even though she knew she must wait to be summoned before entering his presence. Through her brave efforts, her people were saved and their persecutors destroyed. In her block, crowns are set against a sunrise sky, symbolizing the rise to power of Esther and the Jewish people.

Elizabeth: Little is known about Elizabeth, the wife of Zacharias, a priest. She was a cousin of Mary of Nazareth, the mother of Jesus. We know that she longed for a child for many years and probably suffered the shame of being childless. And we know that she finally gave birth to a son, John, who was sent by God to prepare the people for the coming of the Messiah. His wandering in the desert, surviving on locusts and honey, must have caused Elizabeth much apprehension. The trumpets in her block remind us that she bore the herald of the Messiah, and the honeycomb represents the honey that sustained him in the desert.

Mary: Several women in the Bible are named Mary, but to us the name most often means the mother of Jesus. The references to her deal mainly with the birth and death of her Son. She was chosen by God to be the mother of His Son. When she was given this terrifying news by the angel Gabriel, she said, “I am the Lord’s servant.” She had others sons – James, Joses, Simon, and Judas. Mary is remembered by a blue mystical rose with a cross in the background.

Mary and Martha: These two very sisters with very different personalities are always thought of together. Martha was the dutiful one, always mindful of her guests’ comfort and needs. Mary was more attuned to the message of the special guest Jesus. Resenting Martha’s idleness while she, Mary, was working, Martha asked Jesus to tell Mary to help her with the meal preparations. But Jesus said, “Mary has chosen what is better.” Some time later, after their brother Lazarus had died, Martha was the one who sent for the Lord with faith that He could help them. The urns in the design symbolize both Martha’s service and Mary’s receptiveness of the gospel. The stools in the background remind us that Mary knew “only one thing is needed.”

Dorcas: Dorcas has two names: Tabitha was her Aramaic name, Dorcas is Greek. She used her needlework skills to provide clothing for the poor. When she died, there was much grieving, and when the apostle Peter arrived, he was taken to the room where she lay. He sent everyone out, then knelt and prayed. Then he said, “Tabitha, get up.” She opened her eyes and sat up, and, as a result, many people were converted. Dorcas’s block shows a design of tunics to remember her work for the poor.

Priscilla: Priscilla and her husband Aquila were tentmakers living in Corinth. They were Jews who had been forced out of Italy by the Roman emperor Claudius. The apostle Paul was also a tentmaker, and he stayed and worked with them on his journeys. Their home became a haven for evangelists who travelled about the world spreading the gospel to Jew and Gentile alike. Later, Priscilla and Aquila moved to Ephesus where Paul committed to them the establishment of a church. When he returned a year or more later, he found a well-organized congregation meeting in their home. Priscilla’s block shows four tents in the corners, symbolizing the spread of the gospel. Four more tents come together in the centre, where a circle reminds us of the Christian community through which we are renewed to go again and spread the news.

Lydia: Lydia stands out among the women of her day because she was businesswoman. She sold purple cloth at a time when only the wealthy could afford dyed fabric for their clothing. Purple dye was the most expensive colour and those who wore it were the most wealthy and powerful. A person selling purple would have to be a pillar of the community in order to be successful. Lydia did not think about the possible threat to her business when she became a convert to Christianity. She brought her entire household to be baptized and opened her home to the travelling evangelists. Her home became a haven for Christians of the day. Purple borders were often sewn to the edges of garments. The border and centre motif are Greek symbols.

Subscribe to receive email updates with the latest news.